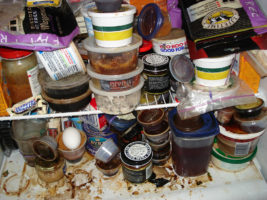 Multiple reports from the Ridge-Noyes area of Evanston indicate that Sam Orozco, WCAS ’18, is strongly considering cleaning the fridge in his off-campus apartment.

“Thinking of cleaning out the old fridge,” Orozco said in a 3:21 a.m. tweet. “Want to wait until the time is right, though.”

Sources close to the situation said that although no actual progress has been made, as has been the case since Orozco moved in in August, they are confident that the junior is strongly considering clearing out the rotten fruit in the crisper and the container of untouched Caesar salad that rotted to liquid at some point in November.

“I know it looks like another empty promise to himself,” said one source, “but I think this time he’s wrapping his mind around seriously, actually cleaning his fridge.”

“I’m starting to really feel out the possibilities,” Orozco told reporters in a phone interview. “I’m doing lots of research into whether I should use a cleaning spray, maybe some kind of sponge-like material, or maybe just wipe it down with a damp paper towel.

“This may be the only time I do this in my life, so it’s important for it to be perfect.”

Featured, Local, No. 216 Eww, Gross, no, This actually happens