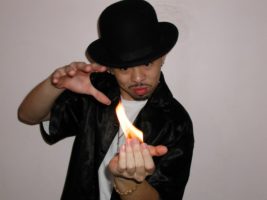 Preston Weplar, local Ace of Spades enthusiast and president of the area Magic Club was once again unsuccessful in seducing a female this past Friday night. After correctly guessing her card an astounding 17 times in a row, Preston was promptly shut down after smoothly asking the girl in question if he could guess her bra size. “She kept picking 6’s and 9’s, what a goddamn tease,” wrote a disappointed Weplar in his diary that night, “I really thought this was going to be my lucky night.”

Weplar is just the most recent victim in a string of serial rejections targeted towards members of the magic community. Magicians, who often have to skip high school dances in order to hone their skills, have historically struggled to gain any sort of interest from women. The trend goes all the way back to the Roman Empire; in fact, the Latin term magae, which means one who lives alone, evolved into the modern word magician.

Weplar, however, has not let his continued failures discourage him from his quest for pussy. While most magic lovers eventually give up and settle for “magic sluts,” rare creatures with the supernatural ability to somehow be attracted to magicians, Preston claims to have learned from his dozens of previous rejections, and has researched mind-freakingly new methods to try out from isthisyourcardforums.net. In order to seal the deal, Weplar is also reportedly perfecting a never before seen trick that will supposedly make him irresistible to ladies. When asked for more details, he smiled mysteriously, saying “a good magician never reveals his secrets.”