CAPS to Hand Out SSRIs to Trick-or-Treaters 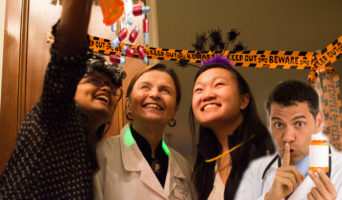 As October 31 approaches, Counseling and Psychological Services, commonly known as CAPS, has announced plans to hand out SSRIs instead of candy this Halloween. “SSRIs, known for their role as a major component in anti-depressants, seem like the perfect goodie to offer trick-or-treating students this year,” said CAPS Director Michael Rothman. “Given the overall stresses that everyday Americans face, we think that most people need a pick-me-up.”

CAPS has based its policy on the fact that students have to face growing instability in world and domestic affairs, the overall depressing nature of college life in general, and midterms. The organization believes that just handing out the SSRIs for anyone to take is the best possible decision. “Look, if we just prescribe this shit, we can help students skip a few months of agonizing over whether they should come see us or not,” stated Rothman when asked about his reasoning for the plan.

While some have criticized CAPS’s approach of just offering SSRIs instead of counseling to solve everyone’s problems, Rothman has defended the decision. “As a grown man living in America in 2017, I know that people just want the quickest possible solution to their mental health problems, and giving them drugs is easier than talking to them about their issues.” Since the policy change was announced, Rothman has been trying to stock up on as many SSRIs as he can by Halloween, believing that students will probably appreciate them after whatever regrettable things they do later that night.