Democrats Pull Off Major Victory in War on Christmas 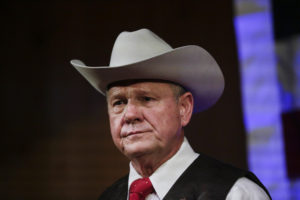 MONTGOMERY, Ala. – The Republican effort to save Christmas suffered a crushing blow this past Tuesday as Republican candidate Roy Moore lost a bitter senatorial election to Democrat Doug Jones.

Moore, a staunch Evangelical and former Chief Justice of the Alabama State Supreme Court, spent most of his career crusading against the separation of church and state and defending Christmas traditions against the “godless” Democrats, especially the tradition of children sitting on Santa’s lap at the mall.

National Democrats celebrated the results from the comfort of their co-ops, wine and cheese stores, and satanic churches. They will soon introduce a bill legally replacing the phrase “Merry Christmas” with “Happy Holidays” on every Starbucks cup in the country.

“There’s no stopping us now,” cackled a gleeful Chuck Schumer as he high-fived George Soros during a press conference. “I can’t wait to personally feed every hardworking family’s Christmas tree into a wood chipper.”

Though disappointed by the setback, Moore announced that he would not give up the fight to save Christmas. “They couldn’t keep me out of the Gadsden Mall, and they won’t keep me out of Washington,” he told a crowd of supporters. Moore has since mounted his horse named Sassy and set off for Washington, carrying only his six-shooters, some beef jerky, and a spare booster seat in case he wanted to “pick up any chicks” along the way.