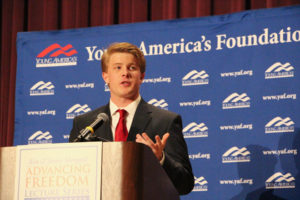 The NU College Republicans scored a huge victory for diversity early this past Thursday. According to the token conservative in your politics seminar, the group has managed to expand their membership in the latest round of mid-midterm-season recruiting by an unprecedented three new members, only two of whom were Anglo-American.

NUCR Secretary of Press Relations Wally Saxton, WCAS ’19, was proud to announce later on in the day that the third new recruit was indeed “an ethnic.” Carlos Montez, Medill ’21, of Cuban-American descent, confirmed that he had joined up with the College Republicans after reading their Facebook post for Abraham Lincoln’s birthday.

“I knew that Honest Abe was big on black people’s civil rights, pragmatic compromise, and telling the truth,” Montez said. “I figured, since he was a Republican, the modern party must also love those things.”

The group has long struggled with recruitment and diversity on Northwestern’s socially liberal campus, and it has not helped itself as of late, endorsing Donald Trump in the 2016 election and choosing to bring provocateur Ben Shapiro and phrenologist Charles Murray as guest speakers last year. But they are hoping that their selection of Steven Moore this winter will show that they accept people of any race who make over two million dollars a year.

“We know the liberals won’t bother to protest his trickle-down views, just like they don’t pay attention to any economic issue that isn’t free healthcare,” said Saxton.

NUCR had been without anybody whose family came from outside of western Europe since 2015, when former president Blake Mansfield graduated along with his “one black friend.”