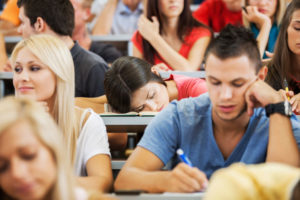 At the time lecture was supposed to start, Harris 107 was at its usual half-capacity for the 2:30 lecture on the history of the Chicago Police Department’s civil rights abuses—with the notable exception that associate professor Catherine Bendel wasn’t yet in the auditorium.

At 2:35 PM, Bendel was still nowhere to be found. TA Lorelei Gideon, a grad student studying U.S. railroad policy, stood up underneath Bendel’s auto-scrolling PowerPoint, held up five fingers, and pointed to the clock to begin the countdown until when people could leave.

As students resumed their conversations—talking ever-louder to be heard over the din—one brave student almost stood up at 2:37 as if to leave before losing his nerve, putting earbuds in, and staring longingly as the clock ticked closer to the time he could just go home and take his afternoon nap. No one else even attempted to leave, held by an unspoken rule dictating how long a class must wait for the professor to show up.

According to library archivist and lore keeper Bethany Walters, the rule is ancient: On pain of death, students must wait for five minutes for TAs, ten minutes for associate professors, and fifteen minutes for full professors before leaving, even if the professor in question hasn’t sent out an email beforehand or if there is absolutely zero chance of learning something beyond what is already covered in the textbook.

Though the lecture was undoubtedly interesting—and sources indicate the attendance sheet passed around each day made it more interesting—the students seem anxious to begin their weekend just a little bit earlier.

UPDATE (2:39 PM) – Bendel just walked in, using the same parking joke she used last time she was late. The students’ defeated sighs drowned out her punchline.