Starting Next Quarter, Students to Be Drafted Involuntarily into One Class Per Term 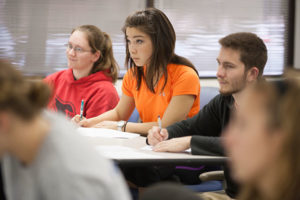 Drawing upon a decades-old clause in Northwestern Student Policy, decisionmakers have announced that all students will now face a mandatory draft into one class per quarter. Dissatisfied with the current system under CAESAR, school officials think this will be a much fairer way to allow every student to maximize their time at Northwestern.

“Well instead of waking up at 6:30 am to frantically add classes to my cart before they get stolen out from under me, I’m taking Engineering Fluid Mechanics,” stated Gerry Shilvonotrov, SoC ’20, “It’s just my duty to the school I guess. I should be able to work in boundary layer theory alongside my 20-hours-per-day monologuing practice.”

Some students, nicknamed “Draft Droppers,” are protesting this new registration system by dropping their mandatory class before the drop deadline expires. “This is fascist, man,” claims Corey Summers, WCAS ’19, “they have no right to take away our freedom like this. These are the best quarters of our lives that we’ll never get back!”

Some have been able to get a registration-exempt status, their parents paying for them to be only part time at Northwestern and full-time at other institutions with transferable credits. However, this has only increased accusations of elitism and inefficiency directed towards the makers of the new system.

At time of press, NUPD has broken up several large-scale demonstrations across campus and jailed dozens of people for possession of controlled hallucinogenic substances.