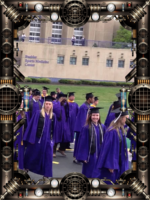 After four years of grinding out painfully small doses of experience at a time, area Student Stefan Lebonowitz, WCAS ’18, has finally leveled up enough to earn a diploma and graduate.

“It’s been rough, probably one of the most difficult things I’ve ever done,” said Lebonowitz. “I mean, that boss level where I had to go in and get an internship despite having no equipment and being underqualified, hoo-boy. It was good I had the cheat code that got me an entry-level position at my dad’s consulting firm. I must have spent hours hacking away at applications and doing almost no damage before I remembered to use it.”

Other students have accused Lebonowitz of abusing a pay-to-win system in order to earn enough experience to graduate, but Lebonowitz vehemently denies these claims. “I sat down and took the time to level up just like everybody else here. Sure I had the money to buy the private tutor expansion pack, but Northwestern included it as part of the experience so it’s not really cheating.”

Lebonowitz seems unaware of the fact that Northwestern was just the tutorial for the real world and that most of his experience points gained won’t apply once he’s out in those levels. He has yet to face an area with real consequences and no save-points.