Polynomial Equation Factored Down to Teeny-Tiny Quadratic During Math Burlesque 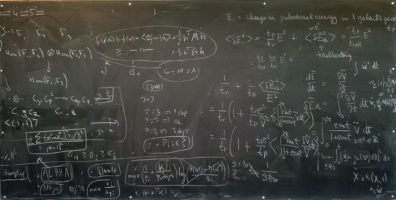 In what critics have described as a “mesmerizing” and “groundbreaking” routine, Northwestern mathematics PhD student Kungang Yu factored a massive polynomial equation down to a scintillating, bare-naked quadratic during the math department’s burlesque show.

“It was mind-blowing,” said Urvi Singh, WCAS ’19, who was in attendance. “I just felt his empowerment glowing onstage. He ripped off factors, canceled like terms in his numerator and denominator … and let me say, his denominator was not bad at all.”

Yu was not concerned that students on campus would look at him differently after seeing him strip down a dense equation with such wild abandon.

“No, on the contrary,” Yu said. “I hope it normalizes what everyone saw last night. There’s nothing wrong or bad about the x-squared factor we all hide underneath layers and layers of higher-order terms and dignified notation. I think it’s healthy to embrace that.”

Despite the popularity of Yu’s routine, Math Burlesque’s permit for next year has been endangered by the act that followed it, in which Professor Keith Friedman asked various audience members to approximate the volume of his bulging jockstrap using integration.