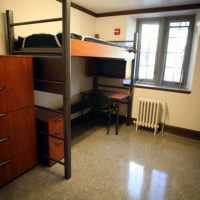 With on-campus housing selection wrapping up this week, Communications junior Rachel Kent, has made a last-minute decision to move her relationship with McCormick junior Bobby Dent, from a “double” to a “single”.

Citing a need for more alone time and independence, Kent ended her arrangement with Dent on Wednesday, leaving Dent scrambling to figure out what he will do next year.

“Yeah it sucked,” said Dent, when asked about his new status. “Everybody knows that this process is pretty bumpy, but you would think she’d give me a little more warning. One day, you’re hot stuff, the next, you’ve been ditched for someone with a lower priority number.”

Kent, for her part, displayed much more enthusiasm.

“I really think the single life is the right move for me,” Kent said. “I’m just in that place right now, you know? Besides, it was going terribly with Bobby. He was the kind of partner who would set his alarm super early, and then snooze it every five minutes for the next hour. That’s the kind of nonsense I’m glad that I won’t have to put up with next year when I’m in a single.”

Since then, Dent has been actively trying to return to a double relationship, from messaging friends to posting incessantly on the Class of 2019 Facebook looking for potential “roommates”.