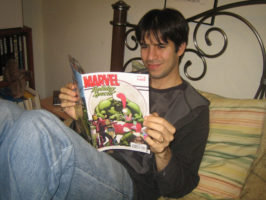 Emerging from his dorm room after 30 hours of non-stop reading, local student Andrew Johnson has confirmed that he had spent the entire time sifting through old Marvel comics in preparation to criticize Infinity War.

“Given that this is one of the most ambitious crossover events in history, I thought what better way to get ready for Infinity War than by reading up on the source material so that I can criticize this movie like no fanboy has ever before?”

In preparation for the event, Johnson has read the entirety of the Infinity War series, the origin stories of every major character in the movie, and other Marvel comics relating to superhero teams ranging from the Fantastic Four to the Defenders.

“Listen, nobody knows if the X-Men are going to show up in the movie, but just in case they do, I’ll be prepared to highlight how adapting them onto the big screen has been done poorly and that no adaptation will ever get it right.”

In the end Johnson was unable to see the movie, after being mercilessly beaten outside the matinee for complaining repeatedly that the movie is unwatchable because it calls Infinity Gems ‘Infinity Stones’.