Geology Major Just a Little Too into Eating Rocks 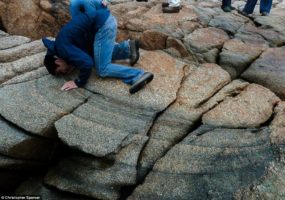 Last week, Timmy Stephens, a sophomore geology major, was spotted on the Lakefill eating rocks once again. His friends have started to take notice of Timmy’s odd obsession and are worried about his behavior.

“Timmy and I have been friends for as long as I can remember, and I’ve seen him do some weird stuff,” Sarah Ludwick, WCAS ’20, said. “But nothing as weird as when he took a bite out of my Himalayan salt lamp.”

Another one of Timmy’s friends, John Turner, Medill ’20, has noticed strange behavior too.

“Timmy keeps asking if we can hang out at the quarry, but we never want to, so he just goes by himself. I don’t know what he does down there.”

His friends think that his new habit has something to do with his recent geology studies. Ludwick recalled him telling her that “geology is my passion. I want to live, breathe and eat geology for the rest of my life.”

Concerned friends are also troubled by his plans to declare a second major – anthropology. “If you draw the line from the rock-eating thing…” Turner said, “does that mean he’s going to become a cannibal?”