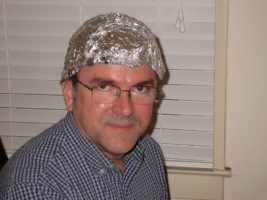 Last week, superhero fans everywhere were devastated by the death of Stan Lee, creator of the legendary Marvel universe.

There is one superfan, however, who refuses to accept the accounts of the comic book icon’s passing: Marvel conspiracy theorist and part time waiter at the Olive Garden, Kyle Briggle.

The 32-year-old comic book junkie is reportedly convinced that Stan Lee is not dead and will return in the next Marvel film, telling Flipside reporters, “I just don’t buy it.”

While every major news outlet offers reports that Lee died last Monday, Briggle’s bulletin board hanging in the lower-level of his step-mom’s condo says otherwise.

In this basement-turned-bachelor-pad, Briggle’s pictures of various Marvel characters connected by an intricate web of red yarn presents a very different story than the one told by the mainstream media. It is here, amidst piles of comics, Xbox DVDs and empty bags of Funyuns where his sleuthing skills really shine.

When the news of Stan Lee broke, Briggle had already been working on one particular conspiracy about the upcoming Avengers movie. Each day between shifts at the Olive Garden, Briggle heads back to what he calls his “Marvel Man-Cave” where he re-watches old movies from the franchise while scribbling furiously onto multi-colored post-its. So when the news came out last week of Lee’s passing, Briggle immediately deduced it couldn’t be true.

“That’s just what they want us to think,” he said, gesticulating wildly while holding a half-eaten bag of Cheetos in one hand.

“This is classic Marvel: characters fake their deaths all the time. It’s just like in the first Thor when Loki seemed to die in a black hole but then returned to Asgard in the next movie. Now again in ‘Infinity War’ it looks like Thanos killed him, but I’m certain he’ll be back in ‘Avengers 4.’ Marvel is clearly doing the same thing with Stan.”

When Flipside reporters pointed out that Stan Lee is a real human and not a fictional movie character, Briggle dismissed the notion, saying it was “too easy.”

“Look at Captain America,” Briggle said, glasses askew and hair sticking up in all directions. “He seemed dead, but was actually just frozen in the ocean for 50 years.”

Briggle then launched into an animated explanation about how all the Avengers killed by Thanos in “Infinity War” are actually still alive in an alternate reality.

“All I’m saying is that Stan’s death is too obvious,” Briggle asserted. “There’s got to be something more, and I have a pretty good inkling as to who may have some answers.”

At press time Briggle was being issued a restraining order by Jeremy Renner, aka Hawkeye, following Briggle’s repeated attempts to scale the fence to Renner’s house.