Scientists Discover Girls’ Bathroom in Locy is a Portal to Hell 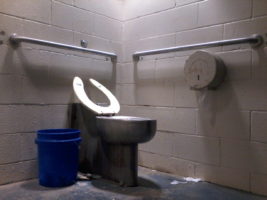 The south campus community was rocked by the recent uncovering of a demonic portal in the Locy Hall girls’ bathroom by top Northwestern investigators.

While some students were shocked that a humble girls’ bathroom was chosen among millions of contenders worldwide to serve as a gateway to eternal damnation, many were unsurprised by the revelation.

“I knew there was something wrong with that place,” said Lisa Quinn, a WCAS junior, of the restroom in question. “It wasn’t just the upside-down crucifix floating in the toilet or the bleeding mirror, or even the shadows lurking in that weird little alcove…I’ve always kinda sensed a presence.”

“It just seemed right,” said Satan when asked of his decision to open up a portal to hell on Northwestern’s campus. “Even I was creeped out by the Locy basement—I was like, ‘wow, looks like someone beat me to it.’”

Flipside reporters reached out to God for comment, but were unable to receive a response.