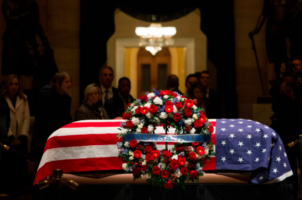 Wednesday was declared a national day of mourning for the passing of former president George H.W. Bush, and many services shut down in honor of the funeral, including the post office and New York Stock Exchange. In a heartwarming move of solidarity, The Daily Northwestern also shut down its normal operations, by withholding publication of any real news. Instead, the usually prestigious campus newspaper has shifted its focus from serious stories to brussels sprouts-related content, such as the recent piece, “Brussels sprouts are the best winter vegetable. Let me convince you.”

“We were worried that the extremely high-quality journalism that we usually produce would overshadow the mourning of the nation and the Bush family,” said a representative from the Daily. “We think that the best way to honor the passing of a great American president is by making sure our readers know just how good brussels sprouts are, instead of reporting on any relevant current events.”

Flipside has reached out to the Bush family for comment on this inspiring move of solidarity. At time of publication, no response has yet been received as the postal service is still delayed.