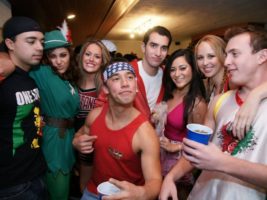 This report contradicts earlier statements by Hughes himself that he can “absolutely get it” on the dance floor, even when they are playing “bangers”, a word that seems to indicate “overplayed pop songs from the 1980s”.

“He said he needed a few drinks to loosen up,” said WCAS junior and token non-white frat brother Gabe Foster. “But after a few shots, he just looked kind of like one of those inflatable things outside car dealerships.”

“He looked like he was doing the wave,” said Allie Bryant, who connected with Hughes at the party. “We started grinding, but he was just kind of still down there.”

However, Hughes still found his night of “dancing” productive.

“I went home with him anyway,” Bryant said. “If it isn’t gonna happen with a white nerd who can’t dance, it’s probably not gonna happen at Northwestern.”

Hughes seems mostly unbothered by the commentary on his dancing.

“It’s not the worst thing to happen in my frat house,” he said.