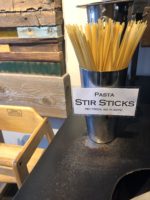 After deeming the replacement of wooden coffee stirrers with pasta to be a success, NU has decided to take its efforts one step further by replacing all tampons in feminine hygiene dispensers with raw linguine noodles.

Several students are still trying to process this environmentally-friendly development.

“I can’t believe this is actually happening! Seriously, who approved this?!” asked Eliza Miller (WCAS ’20), presumably because she wanted to thank the mastermind behind this groundbreaking advancement in environmentalism.

Gerald Kearney, a spokesperson for NU, explained that the university places a high priority on innovative, sustainable solutions.

“This solution kills two birds with one stone. It’s more cost efficient, and it will help the environment,” he said. “We also prioritize inclusivity. That’s why we’re going to offer alternative gluten-free linguine, too.”

This move has been praised by environmentalists as “a step in the right direction,” “cutting edge” and “finally putting Mother Earth first.”

Despite widespread enthusiasm, the policy has been criticized by dining hall chefs, who have had to throw away entire trays of untouched spaghetti dinners after an unprecedented number of students opted for the salad bar.