Hollywood Not Yet Sexist Enough, Plans To Release ‘12 Angry Women’ About A Dozen Jurors With Synced-Up Cycles 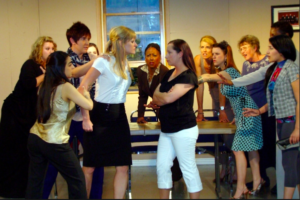 In the face of a progressive movement to improve the film industry for women, one man (and a team of several other men footing the bill) decided to go against the grain and create a story about 12 female jurors with synced-up cycles. Studio executives report that the film, Twelve Angry Women, will be about whether the jurors acquit an innocent citizen, or be catty bitches and mock their super cool boyfriends for not being fucking superman and lasting less than two minutes.

“Inclusivity? I’ll show you inclusivity,” screenwriter Jon Sullivan reportedly muttered under his breath as he penned a script with exclusively female roles. “Fuck you, Sheila, I can write women,” he continued while making sure to write each character as offensively one-dimensional as he possibly could.

Reportedly among these tropes in the dozen main characters are Sexy 5’10 125lb Girl, who can beat up a man several times her size and responds to shocked looks with a toss of the perfectly-coiffed hair and an “I have older brothers;” Miss Clean-Shaven, the post-apocalyptic survivor with zero body hair and perfectly plucked eyebrows; and My Bitch Ex-Wife Who Takes More In Child Support Than She Actually Needs, the woman Sullivan swears is not based on his true experiences.

12 Angry Women is slated to hit theatres in July 2019 under Totally Not Weinstein Productions.