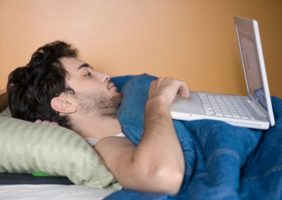 With finals week right around the corner, sophomore Derek Hall began wondering if it is too late to start attending class.

Hall reported feeling constantly split throughout the quarter between attending class and lying in bed watching reruns of Friends while hungover.

“I know the quarter’s almost over and I’ve yet to attend any classes, but to be honest, I’m feeling pretty good about finals,” Hall said. “Especially biology. I’ve been watching a lot of Grey’s Anatomy.”

Hall balked at the idea that he might be wasting his parents’ substantial investment in his college education.

“Let’s be honest. Am I really going to get something out of lecture that I can’t get out of John Green Crash Course videos?” Hall said.

Despite his confidence, Hall wondered if he should attend at least one lecture in each class so he can find the rooms where his finals will be held.

“I know my Earth 101 final is somewhere in Tech, but I’ve never actually been in there,” Hall explained. “I figure going to class on Thursday will be like a dry run for going to the final.”

Hall decided that next quarter he will limit himself to skipping only two days of class per week, instead of his typical five days.

“I think skipping two days of classes instead of five days would really reflect the hard work and dedication I developed this quarter while perfecting my beer pong game,” said Hall. “I also scheduled all of my classes on Tuesdays and Thursdays, which will help.”