From the Archives: Pete Buttigieg Announces Himself Valedictorian Before Grades Officially Released 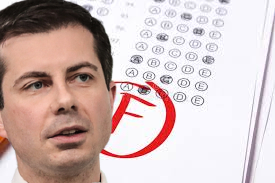 “What a night. Because tonight, an improbable hope became an undeniable reality,” Buttigieg told a random assortment of students in the cafeteria on Monday.

The school announced Monday that the reporting of semester grades was delayed because of “inconsistencies” in some teachers’ grading. The school has still not reported any grades or official transcripts.

Asked Tuesday by the school paper how he can claim victory without results, Buttigieg cited his past performance in school, saying he was “a very good boy who always gets his homework done and eats lunch with the teachers, and anyone who wants to be president one day has to be valedictorian first.”

Buttigieg has not responded to questions regarding his frequent ‘hangouts’ with the school principal, or allegations that several apples were found on the desks of each of his teachers. He remains confident that he is the valedictorian of his graduating class. “I’ve learned a lot from this experience that will be useful in Iowa someday,” he said.