Op-ed: It’s Not Fair That the “Cool Kids” Also Get to Be the “Hot Ones”, There’s No Temperature Left For the Rest of Us. 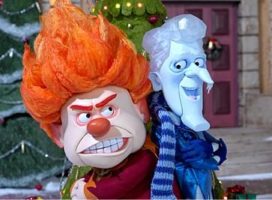 Have you ever seen one of those cliché high school movies? Well if you haven’t you’re probably a loser, like me. But you’ve probably at least been to high school, so you know that there’s always a cult of Popular Kids who rule like a teenage oligarchy. The Popular Kids are popular precisely because they’re simultaneously “cool” and “hot”. Well I don’t like that- so for once I’ve decided to support climate change.

First of all, it doesn’t even make sense. How can someone be both “cool” and “hot” at the same time? I know they’re basically pre-pubescent celebrities, but even they can’t defy the laws of thermodynamics. Second and more importantly, it leaves very few positive, temperature-related adjectives to describe the rest of us plebeians.

For example, the word “icy” is good when it comes to describing jewelry, but bad when it comes to describing one’s unfriendly stares. The same logic applies to the word “frosty” in regards to frozen dairy desserts from Wendy’s and heartless b*tch neighbor, Wendy. So while its’ cool to be “cool”, no one wants to be called “cold”, unless they’re a psychopath who intentionally has no friends.

On the opposite end of the thermometer, one must be careful with how “hot” they are, at risk of  being burned. If you’re “heated” then you probably argue too much and need to calm the f*ck down, you hot-head.  Same goes for the being “fiery”. And I won’t even get into the word “flaming” because it’s kind of an offensive slur.

So what temperature are we supposed to be? “Tepid”? “Lukewarm”?  Do I look like a half-eaten pizza left out overnight? Probably, because I have really bad acne on only one side of my face, but that’s not the point. I don’t want to be some boring, “room-temperature” schmuck!

Or you, know, we could just like, be chill.