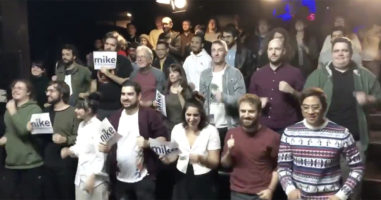 The average student tuition at Northwestern has fallen significantly after students from NU4Bloomberg have dropped out.

On Wednesday, all 60 members of the political student organization dropped out or took leaves of absence from Northwestern University. Many of them cited poor performance on midterms they had taken earlier in the quarter. Other students in the organization refused to explain why they dropped out, mumbling something about a non-disclosure agreement they had made with NU4Bloomberg organizers.

The Northwestern administration made a statement Thursday morning explaining that the dropping students’ tuition accounted for about $55.4 million in lost revenue for the university. Following the drop, the average Northwestern student’s tuition was nearly cut in half, dropping from around $100,000 to a measly $54,500.

For many of the ex-students, Winter 2020 was their first quarter at Northwestern.

“I know I was pretty late to the game,” admitted one Bloomberg-supporting student, “but I really thought I could get it done.”

Upon further questioning, the student refused to explain what “it” referred to, but mentioned his previous campaign to promote journalism class attendance “Stop in Fisk” as evidence of his studiousness.

Notably, the mass NU4Bloomberg dropout saw four of the university’s six students from American Samoa leave Northwestern. The remaining two Samoan students have been attempting to organize a student group supporting Tulsi Gabbard since Winter 2019, but their efforts have gained little traction on campus.