What Passover Means to Me (Guest Article by Tony Hawk) 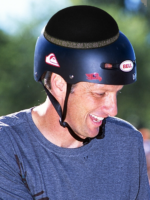 Suh dudes, Tony Hawk (™) here. Know who’s ready for a cowabunga Passover? Me, that’s who. And you should be too.

I may not be Jewish, but at the 2006 XGames I won perfect scores after I unveiled my newest signature trick: the Passover.

It was a decision I made after visiting the Berlin Holocaust Memorial, where my guides, for some reason, kept reminding me that I (under absolutely no circumstances) would be allowed to grind or do any tricks on the stone blocks ⁠— even though that’s totally not something I would ever do. Who did they think I was? Ryan Lochte? I may be sick, but I’m not that kind of sick. Still, the urge to skate and to respect all those we lost during this horrific period in history welled up in me, and I knew I had to act.

The trick involves ten different moves, each symbolizing one of the ten plagues God unleashed on those bogus Egyptians. Blood pouring from my eyes, leaping like a frog, checking myself for lice, unleashing millions of flies into the stadium, sacrificing a sheep, boiling a pot of water, throwing ice cubes, flapping my exoskeletal wings, turning off the building’s power, and killing someone in the audience’s oldest child with the second, smaller skateboard I always keep concealed in my skin flap all take place while I’m flying 60 miles per hour through the air.