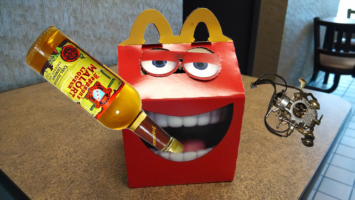 Fast food mainstay McDonalds, or the road trip restaurant your dad refused to go to because “Subway is healthier,” recently released Adult Happy Meals. Complete with colorful artwork and toys of McDonalds characters of yore, the product is meant to give nostalgia to generations of adults. But many in the Chicago area were surprised when their Happy Meals only contained a slightly used carburetor and a shot of Malört.

“I mean, I did the Malört shot,” said Dirk Jansen, a 44-year-old who works in River North. “This morning on my way in, I had to watch some floppy haired, cuffed-pant indie boys make thirst traps on the red line. This fuckin’ neighborhood has gone to the dogs.”

His buddy, Carl Kowalski, was immediately pleased by the carburetor. “I can flip this shit no problem. But I’m saving the Malört shot for the goddamn Bears game.”

Some Chicagoans were more confused by the Cook-County-specific contents of the Happy Meal.

“This is so not a slay,” complained Lauren Greene, a 24-year-old marketing employee with 4 million followers on TikTok. “I made a whole fashion girlie vlog today, and picking up the Adult Happy Meal was going to be, like, a cutie moment. But there’s nothing cutie about wormwood-flavored alcohol. Or internal combustion.”

Other Chicagoans seem to be embracing the zaniness of their city’s Happy Meal.

“I got interviewed by the ‘what did you eat for breakfast today’ guy, and I had to admit that I’d gotten the Adult Happy Meal,” said Hyde Park resident Monica Norton. “But hey, at least it wasn’t the Filet-O-Fish.”