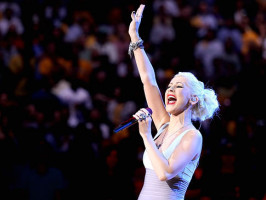 ARLINGTON, TX – Fans of football, proper vocalization, and the United States of America were astonished Sunday night when Christina Aguilera botched the National Anthem at the 45th Super Bowl.

Thinking she made an honest mistake, many viewers have ridiculed and laughed at the singer for looking like a fool with her pants on the ground in front of the entire country. However, the Federal Bureau of Investigation does not seem to be laughing.

“The Bureau simply does not buy this naïve notion that Miss Aguilera messed the National Anthem up by accident.  I mean, how many Americans could be that stupid?  Really?  The only logical conclusion is that this woman is a member of a domestically-based terrorist cell, likely made up of other washed-up celebrities.”

The FBI is currently investigating a theory that Aguilera was the sacrificial lamb in a terrorist plot to blow up the Super Bowl and destroy everyone inside.  By intentionally singing the National Anthem incorrectly, she would signal her accomplices flying above in stolen Navy F-18 fighters to drop their bombs and destroy the Cowboys Stadium.  Unfortunately, nobody seemed to have taken into account that the arena’s dome was closed.  According to the theory, the accomplices, unable to guarantee full destruction of the stadium and life inside it, aborted the mission and left Aguilera behind.

The top suspects to be Aguilera’s accomplices currently include Nelly, Jessica Simpson, Aaron Carter, Jewel, Axl Rose, Kevin Federline, Ozzy Osbourne, The Backstreet Boys and Pee Wee Herman.  This terrorist group calls itself the “C-List,” and its alleged members are often seen either performing at high school dances and other small events or starring in reality shows about their lives (as they perform at high school dances and other small events).  This attack may have been an attempt to remind the general public that these former stars still exist.

Christina Aguilera managed to escape the confines of the Super Bowl and evade the custody of the authorities.  She was last seen trying to fit herself into a genie bottle.