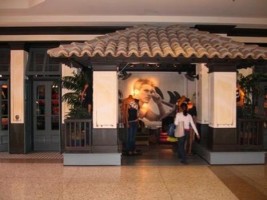 Due to a lack of all natural and artificial light, two boys and two girls who had gone on a double mall date ended up wandering around Hollister for four hours yesterday.

Sources report that the pounding music and overpowering smell of cologne added to their disorientation. While Amanda and Chris groped through racks of sequins and preschool-sized jeans, Joey and Suzie groped each other, furiously making out 3 feet from their companions.

After finding the exit with the help of the light from their Razr phones, the four immediately went to Auntie Anne’s; the boys tried to buy the girls pretzels, but the girls claimed they contained too many calories. After being picked up by Joey’s mom, the boys and girls exaggerated their tales of hooking up and chivalry (respectively) to their friends at sleepovers later that night.