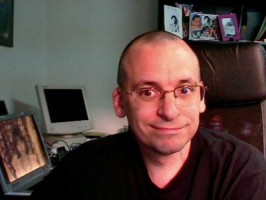 EVANSTON – Contrary to popular belief, it was leaked yesterday that a local businessman, not famous hip-hop performer B.o.B, will perform at Dillo Day. “I was really excited about B.o.B,” said Comm sophomore Dani Ward, “but I guess Bob is good too. I hear he makes an awesome hot dog on the grill.”

An article in several outlets claimed that the popular rapper had posted a tour date on his website that coincided with Dillo Day, but the reporters had actually looked under the wrong tab; Dillo Day 2011 was listed under “Places I don’t fuck with,” not “Tour.” “Yeah, I don’t screw with Bob,” explained B.o.B, “that dude is the hardest motherfuckin’ computer systems analyst I know. I thought I’d put a note on my website so that my fans know that won’t be seeing me messin’ around at Dillo.”

Bob is well known for his high-energy live show, which includes fascinating anecdotes about Jeff from work and his spot-on Charlie Sheen impersonation. It is believed that the timeliness of this impersonation is what made Bob such an expensive act to bring. “People who can do a funny Charlie Sheen voice at dinner parties are in high demand,” explained one Mayfest rep, “so we figured we’d lock up Bob before Sheen does anything else crazy.”

The Flipside was able to get an exclusive interview with the elusive Bob. When questioned about his upcoming Dillo Day performance, Bob responded, “Uh…what?”