US to arm Libyans with Super Soakers 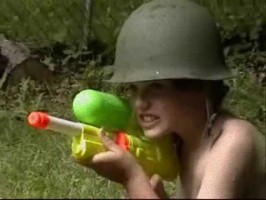 TRIPOLI – Rebels fighting against the oppressive regime of Muammar Gaddafi in Libya rejoiced in the streets after learning that Barack Obama had signed executive order “Hydro Cannon,” allowing the brave insurgency to arm itself with the latest line of NERF Super Soaker water guns.

“At last,” the unnamed rebel leader told The Flipside, “This is a gift from Allah. Not only can we have our revenge against the tyrannic rule; my son Khaled can now have the best backyard barbecue birthday party ever.” The leader could not answer any more questions, as he had to go plan Operation Goody Bag.

Some rebels are not pleased with the US government’s actions. “So this is how they try to placate us,” argued Abbas Mohammed of Misrata. “If the US really cared about the Libyan people, we would be receiving the NERF Tornado Strike with rotating barrel for ultimate wetness.” But the outdated nature of the Thunderstorm line wasn’t Mohammed’s only problem. “How does Obama expect us to have the self-control necessary to turn this magic water fountain on our enemies?” To wit, he gestured around him, where many insurgents had already begun shooting jets of water into their own parched mouths.

Despite the drawbacks, this action has reportedly shaken Gaddafi. A source close to the Libyan leader reported that he had been seen crying in his room, screaming the words “I wanted a Super Soaker, too! Wahh!”