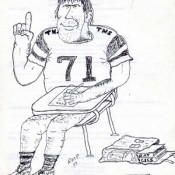 Due to NFL Lockout, Players Forced to Actually Learn

EVANSTON —  Due to the recent NFL lockout, universities across the country are being forced to reconsider their football programs, which often allow players to attend college without ever really being challenged. Some schools have chosen to actually try to educate their players, but the more common response has been to simply send them back to middle school, where they will fit in academically. According to Bill Finkelton, the director of the University of Alabama football program, they’re going to

Class of 2015 More Diverse than Humanly Possible (By Morton Shapiro)

In the never-ending quest for more diversity, Northwestern has finally won. Pop open the Champaign, sake, unfiltered water—whatever your culture does. It’s time to fucking celebrate. Listen to this class breakdown and try not to be over-fucking-whelmed by the diversity rainbow. 30 percent Native American, 25 percent African American, 15 percent Asian, 10 percent from countries that haven’t even formed yet. … Let me pause to give you a second to clean off whatever you just jizzed onto your screen…

Point-Counterpoint: Should the Debate Team Celebrate Their Victory with a Party?

The Debate Team Deserves a Party! By Clare Roth OH HELL YES we gon’ party. (Like it’s our birthdays, gonna sip Barcardi like it’s our—wait, hold up those are the lyrics right? Yes? No? That shit was my jam back at the 7th grade parties) As you will see by the end of this debate, the answer is clear that we, the winning Northwestern Debate Team, should have a party. I’ll break it down for you. We never have anything

EVANSTON – A shy student moved his hand in an upward motion—while his elbow bent almost to the point where it was even with his hand—in an apparent effort to answer a question. As the 357 political science teacher started to make eye contact with the student at 3:45 p.m., the shy guy quickly lowered his hand. “I really thought he was going to do it,” said classmate Laura Berg. “I wonder what his voice sounds like.” The student, whose 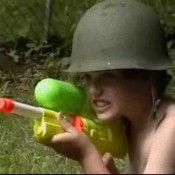 US to arm Libyans with Super Soakers

“Not only can we have our revenge against the tyrannic rule. Also, my son Khaled can now have the best backyard barbecue birthday party ever.” 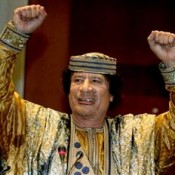