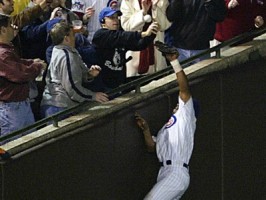 CHICAGO – A local fan is upset after learning no one cares that he cost the White Sox their final game of the year. When Bart Stevens, 28, snatched an easily catchable foul ball from directly above the mitt of outfielder Juan Pierre, he expected boos, thrown beer bottles, and crazed fans attempting to hurt him.

“I was waiting to get hit over the back of the head with something or to get punched by a rabid Sox supporter,” Stevens lamented. “Instead, everyone just shrugged and went back to what they were doing.”

The subdued reaction from White Sox fans is a far cry from the attention Cubs fans gave to a fan who similarly interfered. ESPN recently released the documentary Catching Hell about a Cubs fan who caught a foul ball during Game 6 of the 2003 playoffs and was subsequently stalked, harassed, and threatened by the media and fans.

Instead, Stevens was completely ignored. The White Sox officials told him he could try to sell the ball online for a couple of bucks.

“I’m trying to pay off my mortgage! That Cubs ball went for over $100,000. I’ve got no bids on Ebay, and it started at $1. That’s cheaper than a new ball at Walmart!” Stevens grumbled.

Even the media is not interested; ESPN refuses return his calls, and the Chicago Tribune has filed for a restraining order. The Spartan Banner, the school paper from a local high school whose students attended the game as a field trip, covered the story without mentioning Stevens.

The Flipside decided to publish this article after Stevens begged in person. The third time Stevens approached the Flipside for attention, he burst into tears, prompting one sympathetic writer to spend her coffee break on this story.

“I never would have caught this ball had I known how little people would care,” Stevens muttered. “I had planned on taunting Ozzie at a press conference, but they even took that away from me.”