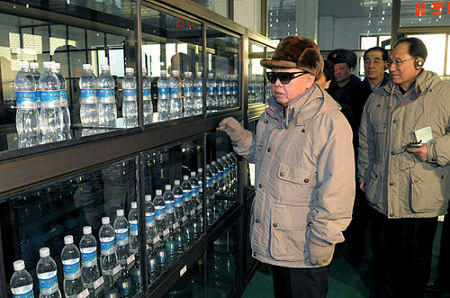 NORTH KOREA- On November 23rd, the nation of North Korea was nearly engulfed by the Pacific Ocean, becoming the most recent victim to rising sea levels this year. While most scientists have attributed this natural occurrence to melting ice caps and global warming, North Korean leader Kim Jong Il begged to differ, stating that he “often looks at the water, among many other things” and “had known for months that the Ocean was preparing to invade”.

Fearing the Pacific Ocean was attempting a coup, Kim began developing nuclear weapons in the 1990’s, eventually leading up to an active missile attack on the body of water in 2011, claiming that it was a “weapons test” gone awry. Over the next year, the leader developed his weapons using the latest advances in computer and Communist child labor technologies.

Believing that his arsenal is now ready for a full scale assault on the Pacific Ocean, Kim is threatening to use nuclear force unless the water withdraws immediately from North Korea. In response to the news of his threats, former U.S. Vice President and self-proclaimed Environmental Ambassador Al Gore reported “the threats against the Pacific Ocean . . . Kim Jong Il . . . global warming . . . America”.

Japanese Prime Minister Yasuo Fukuta also condemns the North Korean leader’s actions against the Pacific, having stated, “When Kim Jong Il fires his missiles into the ocean, all whales and dolphins will eventually be killed.” Fearing that his country will lose a valuable primetime spot on Discovery Channel’s hit show “Whale Wars”, Fukuta has asked the UN to intervene on Japan’s behalf. Meanwhile, the UN is still in deliberation about both why pictures of Kim Jong Il looking at things are so intriguing and whether they will let the United States intervene for them in yet another international conflict.

Op-Ed: As a 30-Year Old Man Who Lives in His Parents’ Basement, Parasite Really Spoke to Me — Mr. Ratburn Endorses Buttigieg, says He Best Represents the Gay Elitist Rat Demographic — McCormick Student Retakes Rice Purity Test, Finds Score Went Up — Ask Flippy: The Walmarts I’m Buying Keep Mysteriously Burning Down, How Do I Get a Property Loan? — Breaking: That Guy in Your Class Finally Trimmed His Coke Nail