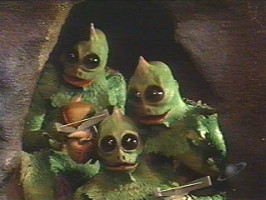 DES MOINES — After receiving only 6 votes in the Iowa Caucus, lizard people said they will return to the marshes to reassess their candidacy. The decision was revealed in a speech delivered to the reptilians’ supporters who gathered in the campaign’s headquarter in Des Moines.

“Hissss… Shsssh shhh hisss hssssss…. I’m sorry, there must be some technical difficulties here.” said one of the lizard people while adjusting the microphone. “It’s hard to say that we’re not disappointed by the results tonight. The future is uncertain, but we will make our decisions considering what’s best not only for us but also for America.”

The candidates, who once held an insurmountable lead in the 7-to-12 “juvenile” demographic of the Republican party, now face a tough decision between staying in the race and cutting their losses.

Republican strategist and Flipside political commentator William Sanderson said it was likely that the half-reptiles would eventually drop out of the race.

“You know, the Republican Party has a history of choosing candidates with strong conservative credentials and values,” said Sanderson “It wasn’t entirely sure that the campaign’s messages were entire compatible with ordinary Iowa voters.”

Lizard people ran a campaign emphasizing less government interventions in insect markets and lower taxes on exotic pets. Their message was overshadowed by the campaign’s many gaffes. During a televised debate back in October, the candidates blurted out that Texas Governor Rick Perry looked “delicious”. In November, one of the lizard people accidentally swallowed a baby whole during a town hall meeting.

While little is known of the future plans for the lizard people, experts speculate that they would return to their careers as sci-fi movie villains.