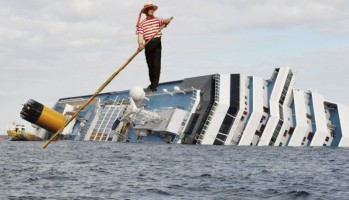 GIGLIO, ITALY- Italian Coast Guard incident reports released exclusively to the Flipside have shed new light on the true cause of the Costa Concordia disaster.  While the official reports have posited several theories (ranging from the sudden appearance of a beautiful woman on shore to repeated ship-to-shore telephone calls from the captain’s mother) as to why the ship ran aground and sank, transcripts from police interviews with Captain Francesco Schettino suggest otherwise.  Twenty minutes into the interview, Schettino appears to have broken down, admitting that the reef, which the ship eventually hit, had “challenged him”.  The transcript continues as follows:

POLICE: The reef. . .challenged you?

SCHETTINO: Si!  It’s like the other car at the stop sign.  It is supposed to stop, not me.

POLICE: Sir — you’re saying the reef should have moved for you?

SCHETTINO: Of course, again with the stupid questions!  I even honked at it.  And on top of all that, I think it said something about my mother!

POLICE: Again, sir, let me remind you that we’re talking about a reef here.

SCHETTINO: Basta!  I’ll call Mama; she’ll explain it to you.

When asked why he abandoned ship before all of the passengers had made it to safety, Schettino claimed that it was lunch time and he thought he smelled pasta on shore.  Formal charges are expected soon.