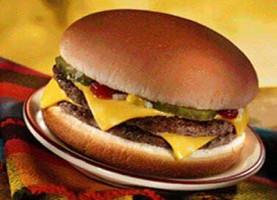 WASHINGTON – A landmark ruling on the legality of “Obamacare” has ended in unexpected compromise. Liberal and conservative factions of the Supreme Court have agreed to allow Americans to choose for themselves between extensive affordable healthcare coverage or a succulent medium-rare quarter-pound cheeseburger. According to Gallup polls, voters are unsure of whether to claim their burger now or wait for secondary rulings on French fry and soft-drink inclusion.

Presidential candidate Rick Santorum has already seized the ruling as campaign material. “This is our chance to defeat the insidious ‘Obamacare’ once and for all!” Santorum thundered at a GOP rally. “Go forth and claim your coupons! Tell Obama that we will not allow death panels or big government to decide our health! Only we have the right to absolutely wreck our bodies!” An aide brought a Republican-endorsed Big Mac up to the stage.

“Hear that sizzle? Savoring that smell? Just look at how juicy this fucker is,” Santorum said, spending the next five minutes enjoying his snack in silence as an increasingly hungry audience began to wander out of the auditorium.

Alexander Edmunds, a local under-employed musician, has found the decision quite difficult.

“I haven’t had health insurance since I was a child,” Edmunds told a group of reporters as he strummed his acoustic guitar in a nearby park. “I just can’t afford it on a musician’s salary. Do I deserve to die for it?”

“So, I take it you’ll be supporting the Obamacare initiative, then?” a CNN correspondent asked.

“Well, I was really hoping to get this cough checked out,” Edmunds answered. “But then I found out the coupon was redeemable at Five Guys. So, maybe next election year.”