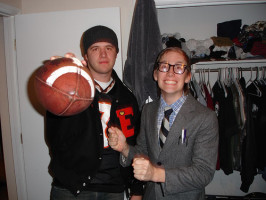 EVANSTON, IL – The Office of Undergraduate Admissions was excited to report Tuesday that the Class of 2016, whose newest members were notified of their admission the preceding weekend, will be the university’s most diverse in over 25 years. When asked to elaborate on the precise nature of this notably vague “diversity” which characterizes the incoming freshmen, Vice-President of University Relations Alan K. Cubbage explained that this year the Admissions Committee opted for a new approach in the application evaluation process in an effort to promote what he calls “academic biodiversity.”

“You know,” Cubbage told Flipside, “every year we accept all these a nerdy straight-A types and then they come and complain about how hard it is to do well with the curve. So this year, we thought, hey, after that whole Supreme Court affirmative action thing we should probably steer clear of too much ethnic diversity or whatever, so why don’t we try to get more kids that are average or slightly below to even out the nerd-distribution.”

Following the brutal mauling of three Pre-Meds by 4.0-seeking classmates during the Fall Quarter Chem 101 final, Cubbage says that the Administration realized that Northwestern currently suffers from an overpopulation of predators. A more desirable ecosystem, he suggests, would bring an entire spectrum of trophic levels to the Evanston tundra and establish a biologically diverse academic food chain. The new curve-breaking predators of the Class of 2016 will feast on lower-level autotrophs such as such as “try-hards,” diligent workers who lack the intelligence of dominant species, similar in nature to the North American Carpenter Ant.

Lower-level heterotrophs will include “moochers,” who likely have reasonable academic abilities but are too lazy to do work on their own, and instead scavenge on the efforts of “try-hards,” or in the case of more attractive moochers, curve-breakers who are single and/or desperate. To identify future moochers in the applicant pool, the admissions committee looked for key words in recommendation letters like, “fails to live up to full potential,” and “lack of motivation.” Further down the hypothetical chain are “snoozers,” sloth-like creatures who struggle to remain awake through introductory economic lectures, and the ever-elusive “gamers,” rarely spotted at classes during the day due to the absurd amount of time they spend playing StarCraft.

Cubbage revealed, though, that the issue of establishing decomposers in the new NU ecosystem still remains. To fill this role while maintaining admissions standards, the University is considering requiring Comm students to take several actual classes before graduation, though conservationists argue that the placement of such a vulnerable species in a predatory environment would likely result in extinction.