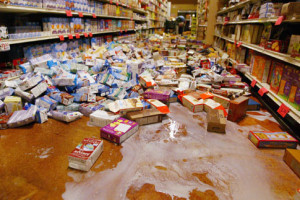 EVANSTON – On Saturday evening, excitement turned to panic as students realized that their unused equivalency points for the week simply would disappear at midnight. Fueled by the promise of “free” food, the “Weekly 14” students quickly began to funnel into Lisa’s Café.

“I was in a state of shock more than anything. Seeing that wall of items ranging from chocolate Teddy Grahams to diet lemonade powder felt like seeing 40 of your children drowning, and only being able to save three, possibly four if you save the slightly expired children,” said Jayden Morrison, a Weinberg freshman.

As one could imagine, such drastic decisions led to long lines. Frustrated linegoers fearing a steadily approaching midnight began to shout and push their way to the front of the line. An RTVF major even suggested “Titanicking it” and using a bench as a battering ram. These actions quickly evolved into riot-like behavior as the mob began to grab whatever foodstuffs they could while Lisa’s staff fled due to safety concerns.

“It shadily was like the scene in War of the Worlds where Dakota Fanning and Tom Cruise try and get on that boat thing to avoid the aliens and everyone is pushing and stuff. Except instead of Dakota Fanning this hot girl who is randomly in McCormick was beating the crap out of this Comm. major over a diet coke 12-pack,” commented Tamara Suchan, a transfer student.

“As a part of the mob, I felt a compulsory need to grab as many boxes of wheat pasta as I could. I have Celiac Disease and all I could think to do was stuff boxes of pasta under my shirt before I was jumped,” said Slivka resident Sarah Smithe.

After ten minutes of pure chaos, the mob began to dissipate as rumors of a PIKE pregame began to swirl. Lunchables in hand, the mob was gone, leaving only shattered dreams and SpaghettiOs.