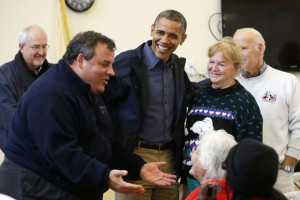 During the time of panic, Obama reached out to New Jersey Governor Chris Christie. Governor Christie explained the crisis of having very little to eat or drink as grocery stores around the state were destroyed. Obama, in turn, was about to make a fat joke, but was silenced by a slight cough from his press secretary.

Horrified by the damage, President Obama declared a “State of Emergency” while he whispered under his breath to Biden, “Should have declared that one in 2009.”

After spending a couple hours in the wreckage, President Obama took a cue from the New Jersey Nets and left as soon as he could.