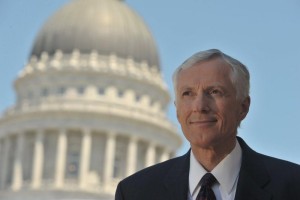 SALT LAKE CITY, UT — Officials from Utah admitted yesterday that they entirely skipped counting the ballots from last week’s general election. Instead of tallying the votes, the Office of Lieutenant Governor, which handles elections in the Beehive State, admitted to just making up numbers that add up to rough estimates of voter turnout.

“We believe that while accurately counting the vote tallies could be nice, quite honestly, we just didn’t find a good enough reason to waste our time on it,” said Lieutenant Governor Greg Bell. “Let’s be honest, we all know we’re voting for the Mormon.”

Voters from Utah were largely indifferent towards the revelation. “I mean, sure, knowing exactly how many people voted for Obama would make it easier to demonstrate how heavily conservative this state really is,” said Nephi Young, a consultant from Ogden, Utah. “But then again, most of us can’t drink caffeine so why stay up late for something that really won’t matter at the end of the day? Besides, if a fair democracy requires a large scale government-led counting operation, maybe it’s not something I support at all.”

At press time, the entire Office of Lieutenant Governor was seen planning a road trip to neighboring state Colorado.