2013 Sorority Recruitment to be Run by USSR 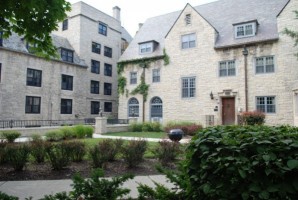 EVANSTON — Freshmen girls were stunned when sorority Preview Day turned into something resembling a scene from 1984. Freshman Stephanie Feldman “had… no idea that… the USSR had infiltrated parts… of American culture,” pausing a few times to look over her shoulder for undercover sorority members. Feldman later tried to complain to her friends about the rigid and ridiculous nature of the event, but she was snatched away by mysterious women in black ski masks before her sentence could be finished.

Another freshman, Julia Stevens, a resident of PARC, was suspected of being brainwashed during the recruitment process. She reflected, “Eating barely nothing and drinking cucumber water definitely brought out the best in us, and it was a great way to show our true nature.”

Delta Delta Delta Delta members gave no slack to Avery Bradshaw, who confided in a sister that she was “always rushing to class.” Upon using the forbidden word “rush,” she was escorted out, but not before the sorority members stared her down, ominously singing their song like robots, and making sure the air she breathed was not in any way affiliated with that sorority.

Most freshman girls made it through the gauntlet of bullshit, and some were even open about their feelings toward the event. However, like Feldman, most of these girls have not been seen since.

One professor in the history department, who preferred to remain nameless, claimed, “What goes on at that event would have made Stalin jealous. Not even he could command such order and precise attention to detail.”

Unsurprisingly, all sororities so far are reporting that Preview Day was a “magnificent success,” and the girls who want to rush have publically agreed. Whether they agree or not doesn’t matter though; only the blonde girls get in.