PA Group Reunion Dinner About as Awkward as You Would Expect 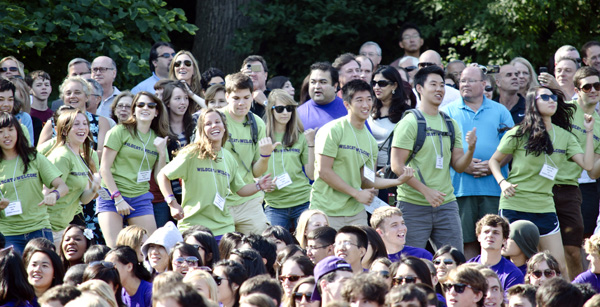 EVANSTON — Reports emerging from the Noodles and Company in downtown Evanston indicate that Peer Advising Group #151’s reunion dinner has been extremely uncomfortable for all in attendance.

“I thought this would be a fun way for us to reconnect and catch up!” said Peer Advisor Jeanine Houston, whose outward enthusiasm in no way reflects the horrible sense of clinging despair she feels at the prospect of this idea being an absolute piece of shit. “We are just one big family after all!”

“This is ridiculous,” said Weinberg freshman Jack Grande. “I was supposed to go up to my fraternity house and be cross-faded by now. Instead I have to deal with Jeanine and her goddamn questions about feelings and improvement and how great Northwestern is. Such a drag.”

The dinner was expected to last no more than “thirty-minutes tops, or else I’m going to peace the fuck out,” but as of press time, Group #151 has been sitting at their table for more than an hour. They have exhausted the “favorite thing from winter quarter” question, the “roses and thorns” conversation, and the “year-end goals” discussion.

“I don’t understand! Everyone just ate really quickly! It’s like they didn’t even want to talk to me! Why didn’t they want to talk to me? I just wanted a nice dinner!” said Houston, her outer shell of painted-on smiles and gushy compliments beginning to crack and splinter under the complete weight of her failure. “We were supposed to be friends for life!”

“Oh my God, seriously, can we just leave already?” moaned Grande, leaning back in his chair and staring up at the ceiling as if to ask his very Maker why he deserved such punishment. “I bet all the good shit at the house is gone by now.”

Sources point out that at precisely 8:24 PM, Houston left to use the bathroom, and upon her return, she saw that her entire group had vacated the establishment. “Shoot! I wanted to hear about their schedules for next quarter!” she said.

“Those little fuckers,” she added.