Girl Removed from Sorority, Did Not Meet Apparel Quota 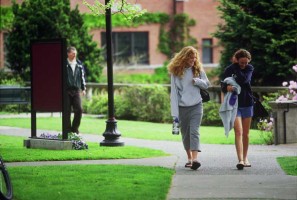 EVANSTON — Tragedy struck last Thursday at approximately 8:10 AM when Weinberg junior Hannah McCune opened her closet. To her utter chagrin, she was only able to procure three items bearing her sorority letters, Delta Delta Delta Delta.

“I just don’t know how this happened,” sobbed McCune into a pile of perfectly clean designer clothing. “I’m a good person. I pay my dues. I work on every philanthropy project. I got like thirty-seven shirts from my Big when I was a freshman. How could I run out of Quad-Delt stuff?”

According to the bylaws of the Panhellenic Association, all sorority members must wear at least four different articles bearing their respective letters every day, in addition to requisite pins, bags, and hair accessories. Failure to comply is grounds for sorority membership termination and ejection from the Quad-Delt house. At the time of publication, officers were engaged in a closed-door meeting to discuss the future of McCune’s Greek life.

Reactions around campus varied immensely. Some were shocked at the prospect that such an event could even happen on Northwestern’s campus. A select few said bitterly, “That would never have happened to me if I had just gotten a bid from Quad-Delt.” Others gloated at the failure of a girl once thought to be “just, like, the perfect sorority girl, don’t you think?”

Experts speculate that the lapse in McCune’s Quad-Delt representation could be in part due to the fact that she never does her damn laundry, instead waiting until the pile of dirty clothes could swallow her roommates whole. Others believe it is the long-foreseen result of too many weekends of leaving various items of clothing at the Tappa Tappa Keg house after “mixers.” Yet another hypothesis is that the change in season from unbearably cold to merely frigid rendered her emblazoned fleece headband un-wearable. The general consensus is that a multitude of factors eventually came together in the perfect storm to bring down McCune’s otherwise spotless reputation.

The Flipside attempted to contact McCune’s boyfriend for comment until we remembered dating doesn’t exist at Northwestern.