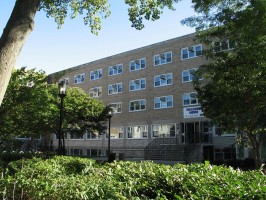 As a service to incoming freshmen and current students debating where to live next year, The Flipside has created Northwestern’s most definitive housing guide ever. This segment details the dorms on the South end of the Evanston campus.

1835 Hinman — You can’t have your cake and eat it too. This place is the liveliest joint south of Plex, but it’s a total dump. Like, last year sixteen people died during the Polar Vortex. Scary stuff, man. But it’s cool, because there’s a C-Store downstairs that almost never runs out of Ben & Jerry’s, except for that one time when Sarah Mills was having a meltdown.

Allison — Or Hotel Allison, as we call it. Actually, no one calls it that. Forget we said that. Once, two SoC sophomores turned their room into an arcade and charged people admission. Seriously, they had room for two beds, two desks, a pool table, six Pac-Man machines, an air hockey table, and a pizza kitchen. It was a regular Chuck-E-Cheese. Business was going pretty well until they realized that no one in Allison talks to anyone else in Allison. They eventually got their first customer, but it was just a CA doing rounds who stopped by when he smelled pizza.

ISRC — Everyone sort of forgets about this place. It’s the bottom-tier sorority of Residential Colleges. You dream about getting into a Res. College, but it doesn’t quite work out so you end up with this rather disappointing second-rate consolation prize. But by golly, you stick it out because that’s what you were born and raised to do!

Jones — It’s like the orphanage in Annie except everyone’s living there by choice and no one ever cleans. (Seriously. Never.) But there’s even more singing and complaining than in the orphanage. Jones is a hormone-fueled rager of extroversion and vanity. So it’s perfect for all you theatre majors out there!

PARC — Park Evanston is a beautiful apartment building with convenient proximity to places of interest such as Whole Foods, Flat Top, Kafein, and that comic book shop. The mildly steep rent is easily justified when one considers its short walk from campus, its prime location, and its long list of amenities. These apartments are perfect for both wealthy individuals looking to live alone and wealthy groups of friends looking to live together.
(Editor’s note: Reporter Jordan Villanueva mistakenly thought PARC referred to a local apartment building and, as a result, failed to evaluate the Public Affairs Residential College.)

Shepard — Shepard is a lovely building with the perfect balance of quality living space and active social life. Some of the perks include
(Editor’s note: We apologize for the inconvenience, this review was disrupted by yet another damn fire alarm in Shepard.)