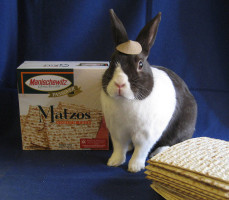 SYOSSET, NY — In order to capitalize on the confluence of two major holidays this past weekend, Russell Stover Candy Company released a new product to cater to all celebrants. The “Passover Bunny” captures the joy of hunting for colorful Easter eggs while remembering the blood, sweat, and tears of one’s ancestors. The hollow chocolate bunny is holding an Easter egg in one hand and a matzo ball in the other, while donning a traditional yarmulke.

According to the candy company’s product designers, the Passover Bunny was an obvious product. “It just makes sense,” claimed Bob Marks, who has been with the company for the past ten years. Marks has seen his fair share of failed designs including the challah flavored chocolate turkey (Hanukkandy Gobblers), the Yom Kippur jack-o-lantern candy corn (High Holy Pumpkins), and most recently, the Chinese New Year chocolate cherubs (Little Dragon Babies).

Though previous holiday mash-ups were flops, Marks is convinced that the Passover Bunny will be well received due to the similarities between the holidays. “Both traditions are celebrated by eating hard boiled eggs and other unusual foods. During Passover we eat bitter herbs dipped in saltwater to remind us of the tears and bitterness of slavery, and during Easter we eat exorbitant amounts of sugar to remind us we probably shouldn’t do that.”

Marks also commented on the similarities between Jesus and Elijah, saying that leaving the door open for Elijah is similar to unlocking your bedroom door so the Easter Bunny can leave you candy and an iTunes gift card. Marks was unable to clarify what the latter had to do with Jesus, but he sensed it was “similar to the whole Christmas stocking deal.”

Marks also announced an additional twist on the Passover Bunny. “In order to capture all the fun and festivity of this jam-packed holiday weekend, Russell Stover’s is releasing a limited edition treat.” The Pass(the Joint)over Bunny has the same exterior, but is filled with an eighth of premium recreational marijuana to celebrate 4/20. You can only find the special edition bunny on grocery store shelves in Washington and Colorado, look for the purple box that says “L’chaim so high.”