OPINION: I Could Husk Corn at the Age of 3 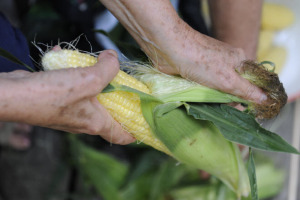 Today, October 18, we Wildcats face a seemingly fearsome foe. The Cornhuskers of Nebraska have marched into our territory with the intentions of crushing our dreams of an undefeated football season. Though the challenger seems mighty, as Northwestern’s token country boy I promise you that we have nothing to worry about.

See, friends, these beasts of the gridiron have but one claim to fame: Cornhusking. To you city folk, that’s what it’s called when you take the “leaves” off the outside of the corncob. And let me tell you- it’s easy as pie!

When I was three years old, my Pa-Paw handed me a bucket of corn and told me to get to work. I’d never done this before, but three-year-old me picked it right up. It only took me twenty minutes before I had three-dozen ears ready to boil and butter.

As Wildcats, we clearly have the upper hand here. While the Nebraskans are busy showing off their husking abilities, we are on the vicious prowl for prey. Nothing is safe from us: small rodents, young deer, even the occasional beaver! I even seen a Wildcat at Pa-Paw’s house once carrying the neighbor’s dog from down the way.

Look, Nebraska, if you want an intimidating name, pick “Bean Walkers1,” or “Detasslers2.” Hell, even “Cow Inseminators3” is a better shtick. I guess what I’m trying to say is, I been husking corn for fifteen years and you ain’t gonna scare me!

1 “Walking beans” is a common summer job for rural teens that consists of walking up and down rows of soybeans, often multiple acres a day, pulling weeds and ensuring plants aren’t overcrowded.

2 “Detassling” is another common summer job for rural teens. One walks up and down rows of corn pulling off the tassels, ensuring the plants will not self-pollinate. Often described as a plant version of castration.

3 Many rural teens have, in fact, shoved their own arm up the vagina of a mature female cow to inject bull sperm and impregnate her.