‘That’ Student Causes TA to Have Mental Breakdown 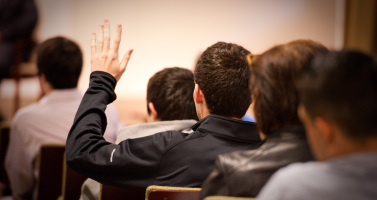 EVANSTON — This past Thursday, a Northwestern graduate student suffered a mental breakdown after being corrected by undergrad. The episode was a result of several incidents occurring during the discussion section for Math 236.5, “Introduction to the Differential Calculus of Dag.” The grad student, who is to remain nameless, was working towards a master’s degree in the mathematical properties of all numbers between seven and eight. However, starting in the first discussion section, one of the students, Justin Hass, insisted on pointing out every mistake that the T.A. made.

“It started out with small things; Justin would tell the grad student that he forgot to carry the one or something. But as the weeks went on, he became progressively more annoying,” one student reported. There are numerous accounts that by week four, Justin was beginning to point out flaws in the grad student’s handwriting, insisting that his educational well-being was at risk because he could not tell the difference between the x’s and y’s.

The tipping point for the T.A. involved Justin commenting on the shortening of the word “therefore”. After Justin was heard to have said said, “How do you expect me to learn if you don’t even take the time to fully write our words?” The T.A. reportedly started twitching and eating his chalk. The episode did not stop there. Campus security reported that a naked grad student was seen running across campuses screaming, “That little piece of shit must die!” repeatedly.

Campus security quickly managed to detain the grad student and immediately transferred him to a psychiatric ward. When asked how he felt about the incident, Justin replied, “It just goes to show you, he was obviously unqualified to be lecturing on the mathematical implications of Dag. Who hires these people anyway? Don’t they have to pass a basic handwriting test?”