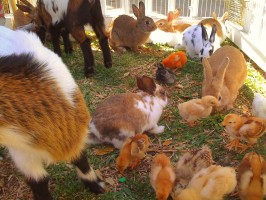 The reason why I set the scene in such a way was because Northwestern students were legitimately placed in buses, driven an hour into the depths of bumblefuck, and then released to go party in a barn. And when I say barn, I don’t mean like an abandoned barn that the frat discover one day while picking flowers in a meadow, I mean like a barn that is still functioning to this day. Not only were the drunken hoes acting like animals, but there were actual REAL, LIVE ANIMALS present at the event. While students grinded upon Betsy the Cow, they also felt the need to milk her for chasers. Not only that, but I think Porgy the Pig was captured and used in a group costume for “The Three Little Pigs.” I think the best part, however, was that the students were directed towards the horse stalls if they needed to go to the bathroom…. WITH THE HORSES STILL IN THEM. This party was like the movie “Animal House,” emphasis on the “Animal.”

While the students transformed into krunk-mode as the night continued, I couldn’t help but realize that the DJ was about 85 years old. He was so old that he didn’t even play songs from this century. Instead of dropping some “Anaconda” or “Talk Dirty,” the DJ instead played songs like “I Got a Feeling” by the Black Eyed Peas. The entire music selection made me feel like I was at a spooky themed Bar Mitzvah for my cousin Isaac rather than at a college event. I guess the only thing to say to Tappa at this point is “Mazel Tov.”

Throughout the entirety of the party, students struggled to get drinks, probably because the bar was the size of a box office window that one finds at the movie theater. Not only that, but the party’s security was a real biotch, announcing phrases such as “get off the tables” and “No, Betsy will not moo for you if you slap her utters with a stick.” By the end of the night, I even ended up getting all my shit stolen, which really sucked. However, if I had to take away one good moment from the night that summed up the mood of the party, it would have to be a direct quote given by a slutty role of paper towels: “Does anyone have a tampon?”