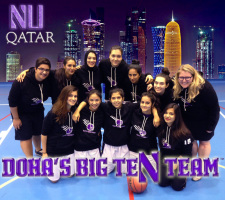 Authorities have questioned Phillips’ decision. “There is no Big Ten in Qatar,” pointed out one skeptical sports fan. “In fact there’s only 8 universities in Education City, so at most there could be a Big Eight.”

Others have expressed confusion over how they should refer to the team. “Is it pronounced kah-tar, or cater?” asked Lily Lengua, MSJ ’18.

NU Qatar has refused to let these points dampen their enthusiasm, however. Already billboards advertising the team have sprung up like oil refineries (one pictured here). Students are optimistic about the future of their athletics program. “We’ve successfully sustained a Journalism school amidst one of most heavily censored societies in the world,” one emailed The Flipside. “What can’t we do?”