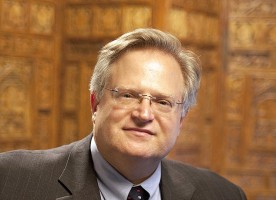 EVASNTON — This past week, sources confirmed that Northwestern lecturer Professor Sutyarin was glad that local student Jerry Olbach, WCAS ’18, had pointed out a blatant dangling modifier on slide twelve of his lecture notes.

“When I look at the list of my accomplishments, including decades groundbreaking research in the field of neuroscience, it really humbles me when students point out mistakes I make,” commented Sutyarin during his weekly equestrian ride in western Illinois. “It’s important for us professors to be reminded of our humanity. For we too are not infallible.”

At this point, Sutyarin began to dismount his large steed. One might say he was getting off of his high horse.

Olbach said he was proud of how he holds professors accountable for their mistakes. “As a student who pays over $60,000 a year, things like typos are not acceptable. I did the math and each lecture slide costs approximately $32.51. A slide worth that much should not have any mistakes whatsoever.”