NU Men’s Basketball Might Be Good, But You Wouldn’t Know, Would You 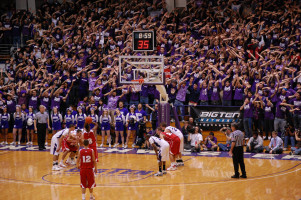 EVANSTON – Following a thrilling win against the Wisconsin Badgers, the Northwestern Men’s Basketball team is currently on track for one of its best seasons yet, but you wouldn’t know, would you. Welsh-Ryan Arena has been quite the hostile environment at the beginning of conference-play this month, but it’s too far of a walk for you, isn’t it. Coach Collins has been quoted saying we could make the NCAA Tournament this year, but it’s not like you pay attention to the best men’s basketball coach Northwestern has ever employed. The weather is pretty bad this week, so Northwestern has paid for shuttles to take you from your dorm to Welsh-Ryan, but that’s too much effort for you. Hell, those Tuesday nights where you’re just sitting in your room are a great opportunity to head out to a Northwestern basketball game, but Tuesday is apparently one of those days when you get your homework done, of course. Then again, you don’t have the school spirit to support any athletic team other than the football team, and that’s only when we’re good, but you don’t care, do you?