Engineer Goes to South Campus to Find Himself 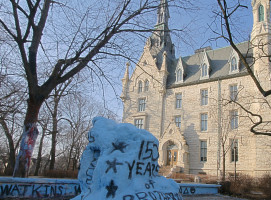 “Up until a few days ago I was afraid that if I went to South campus, the silly environment would distract me from my studies and wreck my grades,” said Martin. Sources say he used to spend all his time diligently working in Mudd.

“Somehow I still failed an exam after a lot of preparation and no visits to South campus,” said Martin. “After that I realized I was a complete failure. There was nowhere left to turn but South, so I just hopped on a shuttle and left it all behind.”

Allegedly, since making this decision Martin has not returned to North campus once. Instead he has begun wearing only joggers, learned to play the guitar, and now spends most of his free time contemplating life on the Lakefill.

Due to his new outlook on life, reporters indicate Martin will soon be moving to Allison and switching his major to Art History.